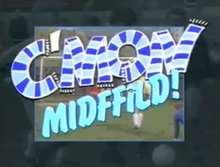 C'mon Midffîld! ("Come on Midfield!") was a Welsh Sitcom created in 1988 that ran for six series until 1994. One of the most successful Welsh-language comedies, it focused on the fictional village of Bryncoch just outside of Caernarfon, but most importantly on the village football team committee. The main cast consists of team captain quick-to-anger captain Arthur Picton, his Bumbling Sidekick Walter "Wali" Tomos, and rounded up by the Only Sane Man Tecwyn Parri (who also serves as the team's goalie). Part of the main cast outside of the footy committee was Mr Picton's daughter, Sandra, and her boyfriend/husband and member of the football team, George - a leather-clad punk rocker from Caernarfon. Naturally, Mr Picton doesn't get on with his son-in-law.

Although it is in Welsh, the subtitles are only available in English and translated pretty well, managing to substitute Welsh puns with English ones. The show is well-known in north Wales and its stars went on to become successes; Tecwyn was played by famous Welsh-language musician Bryn Fon, and Mr Picton (John Pierce Jones) became an actor on the Big Screen, starring in films like Lesbian Vampire Killers. There was a reunion special in 2005, inspired by a similar reunion special of Only Fools and Horses.