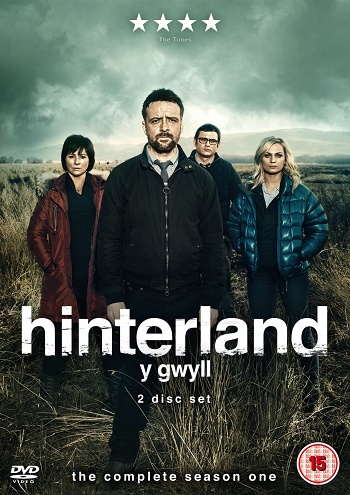 Y Gwyll (Welsh: The Dusk), titled Y Gwyll/Hinterland in bilingual and Hinterland in English-language broadcasts, is a Welsh detective drama that airs on S4C and BBC One Wales and is available for streaming on Netflix in North America. Each scene was shot twice, once in Welsh, and once in English. Two versions were then broadcast: one completely in Welsh, and one in bilingual Welsh/English. The first series aired in October of 2013, and it was renewed for a second series.

The focus of Y Gwyll is on our protagonist DCI Tom Mathias (Richard Harrington), who has relocated from London to the coastal town of Aberystwyth in the west of Wales. He is joined by DI Mared Rhys (Mali Harries), DC Lloyd Elis (Alex Harries), DS Siân Owens (Hannah Daniel), and CS Brian Prosser (Aneirin Hughes). The series has been described as Scandi-noir in Wales (or alternatively a Celtic-noir), in the same vein as Forbrydelsen, Bron|Broen, or Wallander, sharing similarly bleak settings and the same moody tone. Some might also describe it as "Luther Goes to Broadchurch."

In April 2016, the series has been picked up for broadcast by BBC4 and is being screened in the Saturday night slot usually reserved for Scandinavian-noir crime dramas.