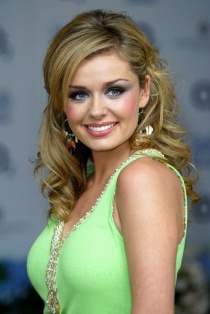 Katherine Maria Jenkins OBE (born 29 June 1980) is a Welsh singer, mainly of "classical crossover" songs. She first performed in musicals such as Calamity Jane and Guys and Dolls in school before joining the Royal School of Church Music Cathedral Singers. She experimented with modelling, but chose to focus on music. In 2000, she sang "Una voce poco fa" by Rossini, leading to a six-album deal worth £1 million, the most lucrative in British history. Her albums have topped the charts each time they have appeared, and she has partnered with such singers as Andrea Bocelli, Placido Domingo, Jackie Evancho, Bryn Terfel and the Mormon Tabernacle Choir.

Katherine Jenkins has also had minor acting roles in shows such as Emmerdale. Her major acting role was in the 2010 Doctor Who Christmas Special "A Christmas Carol," in which she played a terminally ill singer with whom Scrooge Expy Kazran Sardick falls in love. At the end of the episode, she sang "Silence is All You Know

," a song written and composed by Murray Gold. She also competed on Dancing with the Stars in 2012, though she and her partner did not win.

Katherine Jenkins also has a reputation as a Glamorous Wartime Singer, regularly performing for the troops. In 2005, when she was flying to a British base in Iraq, her helicopter was attacked by rockets, but the pilot deployed flares and Katherine was able to arrive and sing. This did not dampen her enthusiasm for singing at all, and she is always happy to sing for lots of occasions.