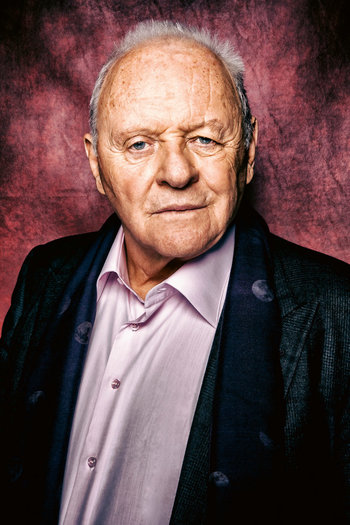 "I edited this article with some fava beans, and a nice Chianti."
"If you do things, whether it's acting or music or painting, do it without fear - that's my philosophy. Because nobody can arrest you and put you in jail if you paint badly, so there's nothing to lose."
Advertisement:

Sir Philip Anthony Hopkins (born 31 December 1937 in Margam, Wales) is a Welsh-born American actor (he became a naturalized US citizen in 2000).

He is best known for playing Hannibal Lecter, for which he won an Oscar, but has had a long and illustrious career most often playing refined characters with a touch of mischief. Generally considered one of the world's best actors. Has played Ptolemy I, Titus Andronicus, John Quincy Adams, Yitzhak Rabin, William Bligh, Richard Nixon, Pablo Picasso, Odin Allfather, Adolf Hitler, C. S. Lewis, Alfred Hitchcock, Burt Munro

, and more recently Pope Benedict XVI. Almost every film he's in is good, and in some cases, it's just because he's in it. He's also known for his deep, smooth voice.

Hopkins is sometimes considered a Classically Trained Extra, but he's really closer to an inversion. Once touted as the Next Big Shakespearean Actor, he deliberately chose to come to Hollywood to make loud, stupid movies because that's what he likes to do. In his own words, "I have no interest in Shakespeare and all that British nonsense... I just wanted to get famous and all the rest is hogwash." He has also admitted that what drives his choice in roles is nothing but cold, hard cash. Though one suspects that he also genuinely enjoys the roles he plays, no matter how ridiculous they are. Pay him his money, and he will show up and act. And your movie will be remembered forever for it.

Despite being known for playing one of Cinema's most famous monsters, Hopkins is known as a very sweet and friendly man who likes to be called Tony. After initially doodling on his scripts, the man has taken up painting and now has his own collection in galleries for sale, the proceeds of which go to charity. On top of this, he is also a talented composer who has written some cracking good music

Hopkins is also well-known for being one of a small number of major actors known on the autistic spectrum; having been born well before autism was first recognized by the DSM in 1952 and long before the autistic spectrum was clarified and broadened to its current extent, Hopkins went undiagnosed until he was 70. While acting, like music, is often considered to be an immensely difficult field for autistic individuals to break into, analysts on the spectrum argue that Hopkins' stellar acting skills are specifically because of him being autistic, in that he can observe and analyze different verbal and nonverbal mannerisms from the people around him and incorporate them into his performances. He's also been a teetotaler since 1975.

He has admitted to being a huge fan of Breaking Bad, even writing a fan letter

to Bryan Cranston when he finished the series.

He also did adverts

for the Will Rogers Institute in 2001.