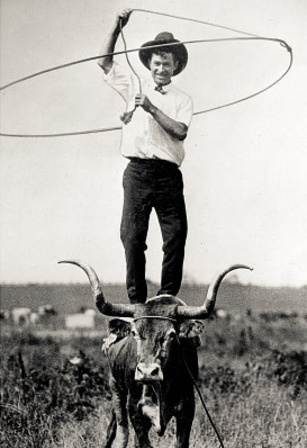 Will Rogers in his natural habitat
"I never met a man, I didn't like."
Advertisement:

Born to a well-to-do half-Cherokee family near Oologah in what is now Oklahoma,note Then known as Indian Territory before becoming a state in 1907 Rogers dropped out of school as a teenager to pursue an adventurous and exciting life as a cowboy. He soon became famous for his rope tricks and appeared in circuses, vaudeville shows, and revues such as the famous Ziegfeld Follies on Broadway.

Over time, he added political and social commentary to the routines appealing to the simple “All American” every man. He eventually found his way into the movies (starring in 71 during his lifetime and was the highest paid star in Hollywood at the time of his death!) and on radio. He also had a syndicated column which appeared in many newspapers and magazines.

In August 15, 1935, while in Alaska with pilot and fellow Oklahoman Wiley Post, their plane crashed into a lagoon shortly after takeoff.

Rogers has since been honored and remembered as an American hero. In fact, Route 66 is sometimes called "The Will Rogers Memorial Highway". Among his other namesakes include The Will Rogers Institute, a charity endorsed by many celebrities; the Will Rogers Turnpike section of Interstate 44, running from Tulsa and passing Claremore, Oklahoma (the home of his final resting place at the Will Rogers Memorial) en route to Missouri; and Will Rogers World Airport in Oklahoma City, Oklahoma. His life story was also the inspiration for the Tony Award-winning musical The Will Rogers Follies penned by Comden and Green, and The Story of Will Rogers, a biographical 1952 film where his son Will Rogers Jr. portrayed his father.