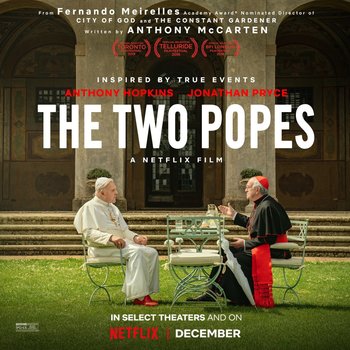 The Two Popes is a 2019 biographical comedy-drama directed by Fernando Meirelles (City of God, The Constant Gardener) and written by Anthony McCarten (The Theory of Everything, Darkest Hour, Bohemian Rhapsody).

It is based on the true story of the conservative traditionalist Pope Benedict XVI and his relationship with the reform-minded Cardinal Jorge Mario Bergoglio, who came in second during the election that raised Benedict to the Papacy in 2005, where Benedict soon found himself overwhelmed by scandal and the demands of the office. When Bergoglio comes to Benedict to try to submit his resignation for other reasons, Benedict turns him down and through a series of conversations the two build up an understanding that would eventually lead to Benedict's nearly unprecedented decision to resign the Papacy in 2013, and allow Bergoglio to ascend as Pope Francis.

The movie stars Anthony Hopkins as Benedict and Jonathan Pryce as Francis. It premiered at the Telluride Film Festival ahead of a theatrical release in the US on November 27, 2019 and a streaming release on Netflix on December 20, 2019. The trailer can be seen here

Tropes featured in The Two Popes include: