Hiding Behind the Language Barrier 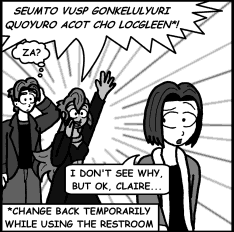 Indiana Jones: Too bad the Hovitos don't know you the way I do, Belloq.
René Belloq: Yes, too bad. You could warn them... if only you spoke Hovitos.
— Raiders of the Lost Ark
Advertisement:

Alice, Bob and Claire all speak Language A, which is usually the language the work is written in or translated into, and may be the "common" language of the world. But Alice and Bob also speak Language B, which may be their native language, while Claire does not, enabling them to have private conversations if Claire is in earshot or they know Claire is eavesdropping.

To qualify, Alice and Bob must also speak a language Claire can speak, and Claire's inability to understand the language must be her only obstacle to understanding it; if she's deaf and unable to read lips, it doesn't matter whether she can speak Alice and Bob's language.

This trope can also be used to keep information from the audience, depending on whether a translation is provided. If the language is real and not translated, it can be a Bilingual Bonus.

This trope can be subverted if, unbeknownst to Alice and Bob, Claire knows the language they are using, leading to a Bilingual Backfire. See also Censorship by Spelling which uses similar methods to achieve the same goal. If Alice and Bob also pretend not to know Language A, they might use a Completely Unnecessary Translator.

Subtrope of Language Barrier. If this is done just to tease and intrigue Claire, it is Teasing from Behind the Language Barrier. If Alice and/or Bob pretend to not know Claire's language because they simply don't want to talk to her, it's Language Fluency Denial. See also Reality Has no Subtitles. Compare As Long as It Sounds Foreign.