Recap / Star Trek: The Next Generation S2E8 "A Matter of Honor" 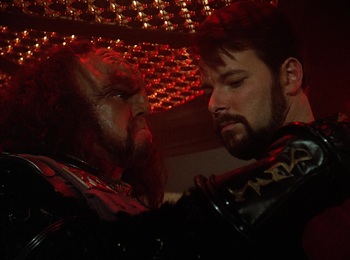 "Exactly where are your loyalties, Commander?"
Advertisement:

The Enterprise-D visits Starbase 179 and takes on some replacement crew as part of an Officer Exchange Program. Picard notes that Starfleet thinks it would be a good idea for someone from the Enterprise to participate as well—and mentions that there is a Klingon vessel, the Pagh, in the area that would agree to take on an exchange officer. Inspired, Riker volunteers to participate because "nobody's ever done it before." He has a slightly rocky start, but manages to develop a camaraderie with most of the crew of the Pagh. The overly paranoid Captain Kargan, however, is a different story.

Meanwhile, the exchange officers on the Enterprise are adjusting. The overly-eager Ensign Mendon, a Benzite, irritates Worf with his constant suggestions for improvement and apparent arrogance, and when he discovers a potentially dangerous bacteria on both the hull of the Enterprise and the Pagh, he waits overly long to inform Picard of the discovery. When questioned, he states that it is a Benzite regulation to wait until they have a full analysis and resolution before reporting the problem. Picard informs him that if there is a potential for danger to the ship, he should inform the bridge immediately and continue his analysis. Upon discovering that the bacteria is chewing a hole in the hull, and that the Pagh is even more susceptible, the Enterprise changes course to intercept the Klingon ship to warn them of the potential danger.

Unfortunately, Kargan has already discovered the damage to his ship and is convinced that the Enterprise deliberately caused it. He orders his crew to prepare to attack the Enterprise. Riker continues to uphold his oath of loyalty to the Pagh, but before the order to fire can be given, he tricks Kargan into taking an emergency transponder that Worf gave him—and Kargan is promptly beamed onto the Enterprise. Worf stuns Kargan before he can attack the bridge crew. Riker takes command of the Pagh and orders a bemused Captain Picard to surrender and repair the Klingon ship. Both ships are repaired, and Riker returns command to Kargan, growling at him and allowing Kargan to punch him to retain his dignity. As Lieutenant Klag (Brian Thompson) helps Riker up, he muses that Riker has handled himself well.

Advertisement:
Klag: You understand the Klingons better than I thought, Commander.
Riker: Thank you, my friend.

As the Enterprise finishes fixing the hole in the Pagh, Riker returns to his ship. Picard congratulates him and tells him to go to sickbay. As Worf escorts them there, Riker notes that the Klingons are a very brave and unique people and that he's glad to have Worf with them on the Enterprise. "Thank you, Commander," Worf says, "and welcome home."