Video Game / The Legend of Zelda: The Wind Waker 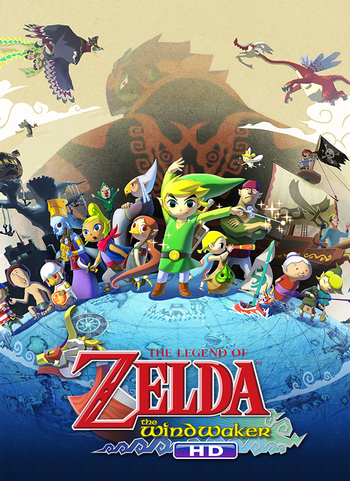 An evil wind is rising.
This is but one of the legends of which the people speak...
Advertisement:

The tenth game in The Legend of Zelda series would be the first Nintendo GameCube release: The Wind Waker (known as Baton of Wind in Japan), which was released on December 13, 2002 in Japan. The game was released in North America on March 24, 2003, and in PAL Regions on May 2, 2003. This game, explicitly set some time after Ocarina of Time (hundreds of years), showed off cel-shading techniques combined with slightly realistic shading to produce a game visually reminiscent of animated films. Its major gameplay concept is the titular conductor's baton, the Wind Waker, which among other things, allowed Link to control the wind. Following from the first true multiplayer Legend of Zelda game, Four Swords, it also included a limited two-player Asymmetric Multiplayer mode using the Game Boy Advance cable, allowing a second player to control Tingle and assist (or hinder) the player.

Legend tells of an ancient kingdom that was saved from the evil forces of Ganon by a green-clad boy who came to be known as the Hero of Time. Years later, when Ganon returned once again to spread his dark power, the Hero did not return as well, and the ultimate fate of the kingdom was lost to myth.

The narrative picks up centuries later on Outset Island in the southern reaches of the Great Sea, where the inhabitants have a tradition of giving a set of green clothes to boys who come of age in honor of the legendary hero. On the same day that a boy named Link receives his own clothes, he spots a large bird carrying a young girl and being chased by pirates. Link rescues the girl, the pirate captain Tetra, but the bird then snatches his younger sister Aryll. According to a Rito postman, this bird has been taking long-eared girls from across the Great Sea and bringing them to the Forsaken Fortress, to which place Link and the pirates go to rescue the captives. Unfortunately, Link's infiltration of the Fortress goes sour, and he briefly catches a glimpse of a large dark-robed figure who orders him tossed out into the ocean.

Link is rescued from drowning by a talking boat who calls himself the King of Red Lions (after his face, which resembles a Chinese lion). This being reveals that the dark figure was Ganondorf himself, and that it is up to Link to not only rescue his sister and the other girls, but also to defeat the dark lord and end his evil reign.

The game tasks the player with sailing the King of Red Lions across the vast Great Sea. While sailing is quite different from riding Epona, requiring the use of the eponymous Wind Waker to shift the wind's direction so that the ship's sail can catch it, land-based overworld and dungeon exploration is largely identical to that in previous games. There are forty-nine islands of varying importance and size, and the sea is vast enough to hide lots of secrets and treasure. And despite the rather cheery, cartoonish visuals, the plot delves into surprisingly dark themes involving apocalyptic events and learning to let go of a lost past. Even Ganon, the main Evil Overlord of the series, is portrayed as a more nuanced, even tragic, figure compared to previous and subsequent games.

A remade version, The Legend of Zelda: The Wind Waker HD was released for the Wii U in 2013 for two specific reasons: 1) to be a stop-gap game to satiate fans while waiting for the new entry developed on the same console, and 2) to serve as an outlet for the developers to test out what they can do with the new hardware. The gameplay itself has been slightly streamlined, particularly the sailing mechanics and a key late-game Fetch Quest. The Tingle Tuner has been replaced with the Tingle Bottle, used to send messages to the game's Miiverse community (although this item no longer functions following the service's shutdown in November 2017). The game also includes the more challenging Hero Mode introduced in Skyward Sword, but in this game you can start a new file with it activated rather than needing to beat Normal Mode first to unlock the toggle for it.

The HD remake was released in North America on September 20, 2013, in Japan on September 26, and in PAL regions the following month.

The game is followed up by two sequels: the direct sequel, Phantom Hourglass, was released in 2007; the distant sequel, Spirit Tracks, in 2009.

Tropes regarding the manga adaptation can be found here.

open/close all folders
#-D
E-H
I-M
N-Q
R-T
U-Z
"I have scattered the seeds of the future..."
Feedback