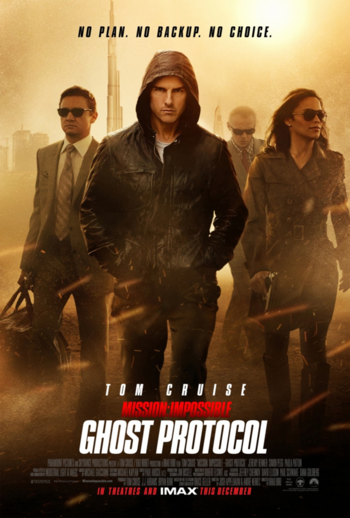 "May there be peace on Earth."
"The President has initiated Ghost Protocol. The entire IMF has been disavowed. Now, I've been ordered to take you back to Washington, where the DOD will label you as a rogue extremist and hang the Kremlin bombing on you and your team. Unless, you were to escape somewhere between here and the airport, having assaulted Mr. Brandt and me... you would then illegally scrounge whatever material you could from a backup supply cache that I've overlooked...You will then disappear..but if any one of your team is caught or killed, they will be branded terrorists, out to incite global nuclear war. Your mission, should you choose to accept it."
— IMF Secretary
Advertisement:

A mission to infiltrate the Kremlin goes awry when a massive bomb goes off, Ethan's team being framed for the act and the resulting political backlash ends up shutting down the entire IMF under operation "Ghost Protocol". Basically the only ones left, they must operate without their normal resources and backup while clearing their names and stopping the real culprit's darker goal.

Directed by Brad Bird in his live-action directorial debut, J. J. Abrams stayed on as a producer, Tom Cruise and Simon Pegg return, joined by Jeremy Renner and Paula Patton, with Josh Holloway and an unbilled Tom Wilkinson in supporting roles. This film is less about Ethan Hunt than the previous three (hence the lack of sequel number). It also has by far the most continuity of the series, with four whole characters returning — twice as many as any previous film has featured — and some actual acknowledgement of prior events.

In other words, Cobalt believes that a planetwide Hiroshima would initiate a permanent Nuclear Weapons Taboo. The question of his sanity is left open-ended (Brandt just thinks he is insane), but one

Deleted Scene makes him sound a lot less like a sociopath and a lot more like a man who's just broken from the stress of his job. He also makes the reasonably solid argument that a planetary nuclear holocaust now is still more survivable than one brought about by the next generation of Weapons of Mass Destruction currently in development, a claim given some credence by the bio-terrorism themes of the previous two films and Benji's own "the coming of the Anti-God" speech from MI:3.

"Good evening, Mr. Hunt. 36 hours ago, there was a breach in our military's communication network. Now, an emerging terror organization known as The Syndicate has control of our entire drone fleet. Their targets: unknown. Your mission, should you choose to accept it..."
Feedback