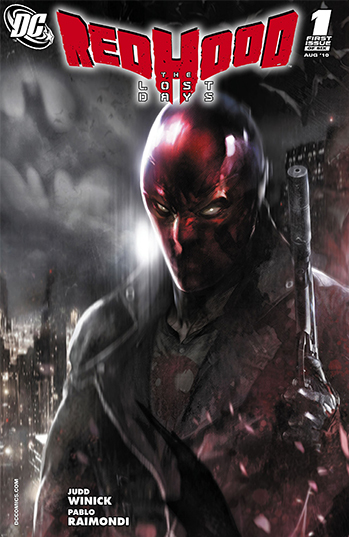 My father was right. I've unleashed a curse upon this world.
— Talia Al-Ghul
Advertisement:

This six-issue miniseries by Judd Winick covers the story of Jason Peter Todd, the second Robin, from the time Jason dug himself out of his own grave till when Talia al Ghul left him with the helmet he would use when he revealed himself as the Red Hood to his adopted father and former mentor, Batman.

It starts with Ra's al Ghul requesting that the manner in which Jason cheated death be found and all those who had knowledge of the catatonic John Doe before the League of Assassins be eliminated. Ra's eventually comes to the conclusion that though Jason came out of his coma and will fight off attackers he is not but an empty shell and that the League is done researching this dead end. Talia disagrees and goes against her father by knocking Jason into a Lazarus Pit but the boy who comes out is quite changed from the boy who was Bruce's son and partner.