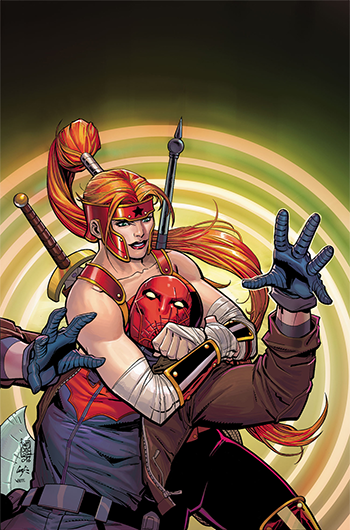 Artemis making friends with her own Bat.
Artemis of Bana-Mighdall is an Amazon who briefly took on the title of Wonder Woman and acts as a more violent contrast to Diana. She is a DC Comics character who was created by William Messner-Loebs and Mike Deodato, Jr. and first appeared in Wonder Woman Vol 2 90, which was published in 1994.
Advertisement:

The Bana-Mighdall are a tribe of Amazons who split from those on Themyscira in antiquity because they chose revenge against the surviving perpetrators of the brutal attack on their people led by Hercules and lost their immortality as a result. Their culture is extremely misandrist and more violent than that of the Themyscirans, who value peace, ingenuity and the message of love above all. The rediscovery of the Bana-Mighdall led to Artemis challenging Diana for the responsibility and title of Wonder Woman, as she felt Diana's approach to her mission was too passive.

She is also known as Requiem, Artemis Grace and temporarily as Shim'Tar, Champion of Bana-Mighdall while Akila was incapacitated.

She is not to be confused with her namesake Greek deity Artemis, Goddess of the Hunt, or with Artemis Crock, who started out as the villainous Tigress before being made famous as a young hero in Young Justice (2010).

Artemis of Bana-Mighdall appears in: