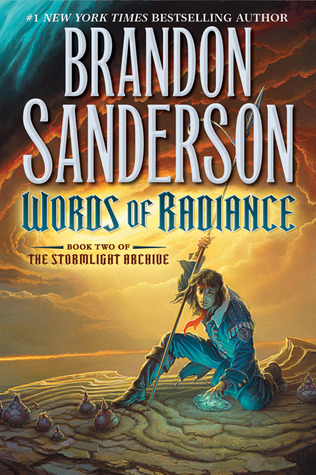 WARNING: Late Arrival Spoilers abound for The Way of Kings.

Shallan: It's not a lie, if everyone understands and knows what it means.
Pattern: Mm. Those are some of the best lies.

Words of Radiance is the second book in Brandon Sanderson's Epic Fantasy series The Stormlight Archive, taking place on the world of Roshar, characterized by its Hostile Weather and Giant Enemy Crabs. Just as The Way of Kings focused on Kaladin, Words of Radiance centers around Shallan Davar, former Impoverished Patrician and current scholar of Roshar's ancient history, which is becoming more relevant to the realm with each passing day.

At the end of The Way of Kings, Shallan and Jasnah concluded the parshmen used as manual labor across Roshar are the Voidbringers, ancient monsters who routinely attack civilization until driven back by the Knights Radiant, who betrayed humanity and vanished thousands of years ago. They set out to the Shattered Plains to meet with Jasnah's family, who lead the continuing war against the parshmen's violent cousins, the Parshendi. However, a twist of fate leaves Shallan alone with nothing but her notes and her new, poorly understood Surgebinding powers, weeks away from her destination.

Dalinar Kholin, Highprince of War, has abandoned his position on the front lines of battle for an even more dangerous one in politics. Confronted with cryptic visions predicting a coming Desolation, Dalinar attempts to unite the Alethi Highprinces to combine their strength and decisively crush the Parshendi. Unfortunately, he is seen either as a fool or insane by most of his peers, and announcing his intention to refound the Knights Radiant has only made his job more difficult.

After rescuing Dalinar's forces when they were betrayed by Highprince Sadeas, Kaladin and his bridgemen are employed as the personal bodyguards of the royal family, putting them in an awkward political position and heaping more responsibility on Kaladin than he deems himself fit to bear. Even though he has sworn to protect their king, Kaladin continues to grapple with his hatred of lighteyes, made worse when some of his personal demons resurface on the Shattered Plains.

Meanwhile, Szeth-son-son-Vallano, the Assassin in White, the Shardbearer who killed Gavilar Kholin and plunged Alethkar into war with the Parshendi, has been given new orders by Taravangian: assassinate Highprince Dalinar.