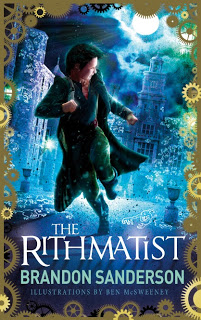 If only he could fly.
A killer is on the loose...
Advertisement:

A 2013 fantasy novel—the first of a series—by Brandon Sanderson, The Rithmatist is one of Sanderson's 'side projects', a non-Cosmere novel for young adults. It features a magic system based on geometry and which uses chalk.

The story follows Joel, a 16-year-old student of an academy—in a seriously Clock Punk Alternate Universe America—that teaches this world's own brand of magic (Rithmatics), though he can't do it himself. He gets free tuition, as his mother and late father both worked for, or in association with, the school.

Joel, named for the author's eldest son for whom the book is also dedicated, is fascinated by the art of Rithmatics—with its lines of power and ability to bring chalk drawings to life—but only a few have the gift and he is not one of them. When Rithmatic students from Joel's school start disappearing, he is keen to investigate.

Since he's not a Rithmatist, Joel seems to be safe—but others are dying. Can he find the killer before the killer realizes just what a threat Joel really is?

You can read the prologue and the first five chapters here