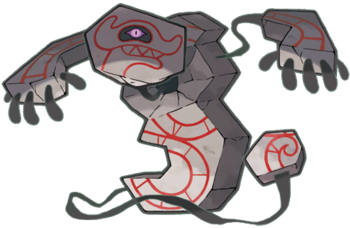 "A powerful curse was woven into an ancient painting. After absorbing the spirit of a Yamask, the painting began to move."

This is a drawing, painting or wall engravement which is alive, usually due to some sort of supernatural presence or Demonic Possession. While in most cases normally attached to a wall, it will usually have the ability to move around, although this movement may be limited to two dimensions (meaning that the character is only able to move along walls or other surfaces). Due to their unsettling nature, these characters will usually be depicted as malevolent, although benevolent examples may also occur.

If appearing in settings based on Ancient Egypt, where supernatural themes are common, these characters may take the form of hieroglyphs. May also overlap with Art Initiates Life, which is when a character has the ability to create art that comes to life.