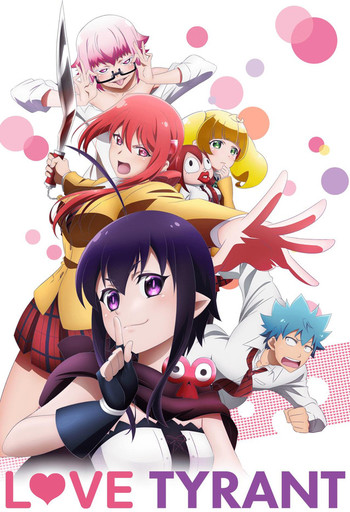 One day, Guri, a mysterious girl holding a mysterious notebook, appears in front of Ordinary High-School Student Seiji Aino. Guri tells Seiji that his name has been written in the notebook, and without a kiss, she will die and he will be doomed to be a virgin for the rest of his life! This odd cosmic event turns Seiji's life on its head, pulling him into a world of magic and craziness he never knew existed, and dragging his long-time crush (and her little sister, and his little sister, and a large portion of his highschool population…) into the mess along with them.

Love Tyrant is a Romantic Comedy manga by Megane Mihoshi. It received an Animated Adaptation written by Natsuko Takahashi as part of the Spring 2017 Anime broadcasting season. It is available for legal streaming subbed on Crunchyroll here

, and dubbed on Funimation here