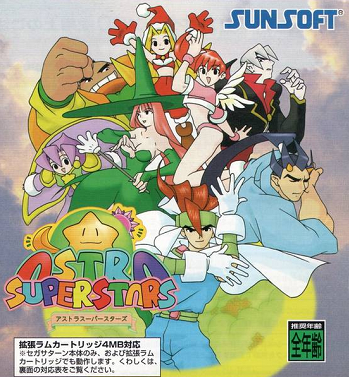 Astra Superstars (アストラスーパースターズ) is a 1998 2D versus fighting arcade game illustrated and designed by SANTACLAUS, developed and published by Sunsoft, and distributed by Tecmo in Japan on June 6, 1998. It is Sunsoft's fourth fighting game after the 1994 Super Famicom Hebereke franchise spin-off Sugoi Hebereke, the 1995 Galaxy Fight: Universal Warriors and the 1996 Waku Waku 7. It is powered by the Sega Saturn-based arcade system known as the ST-V (Sega Titan Video). Unlike most typical fighting games, Astra Superstars is an airborne-based fighting game.
Advertisement:

It was later ported to the Sega Saturn.