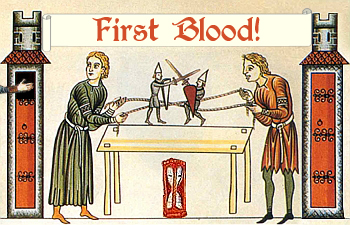 Rounde the Firste: FIGHTETH!
"Round One. Fight!"
— Announcer, Street Fighter and many others thereafter
Advertisement:

"Fighting Game" refers to a game made up of duels between two character (or sometimes battles between four characters) typically fought using martial arts. They are typically styled after martial arts tournaments, with a number of selectable characters competing in one on one, or tag team style fights. The tournament can either be a regular tournament with just a title or mundane prize up for grabs, or the fate of the world can be hanging in the balance. A Fighting Game based on an anime will often take place during a Tournament Arc.

The two most common play modes in a fighting game are Story Mode, in which you play as a single character trying to win the tournament and Versus, in which two or more players fight each other. Many recent games released on consoles have longer, more involved storylines and as such will have both the regular Story Mode and an Arcade Mode, which removes story-related elements and makes the opponent lineup more random. Story Mode generally enables special boss characters, not available for player selection, after you defeat other, lesser characters. Bosses are either the previous tournament champions or the Big Bad and his Dragon. Or you may instead end the Story Mode fighting against another player character specifically designated as your character's rival. Some games have it both ways.

However, most people don't play Fighting Games for their single-player modes, at least today; rather, the multiplayer is the meat and potatoes of most any modern Fighting Game. If you go to a reputable arcade with Fighting Games, you'll often see many people playing them. Depending on your skill level, playing against a random opponent can range from very easy to Nintendo Hard; the latter especially if you're a new player. This is one of the reasons arcades rely on fighters for profit: instead of just playing the same stages or CPU-controlled opponents over and over, a player can come across opponents of all skill levels and styles, and it's this aspect that makes fighting games very popular for multiplayer and has given birth to the Fighting Game Community. This is also one of the reasons that home versions come out far more often on consoles; most PC monitors just aren't big enough for more than one person.

Generally the interface consists of a Life Meter with an optional Mana Meter of some kind, usually used for special power moves. Most Fighting Games give each character a set of special moves that are activated through different button command sequences. While one or two of these will sometimes be high power moves that drain the aforementioned Mana Meter, most of these can be executed at any time. These aren't Secret A.I. Moves; your computer opponents will assume you can use them and will use them themselves. Still, don't expect the game to actually tell you what they are, especially for any secret characters you may find.

Early Fighting Games allowed the characters to move back and forth on a single axis, with some limited jumping. Modern games often have full 3D movement, with complex scenery that can be interacted with (for limited values of "interact" that include "throw through" and "beat heads against".) That's not to say 2D Fighting Games aren't still popular. In fact, the majority of Fighting Games releasing currently are of the 2D variety, even when they use 3D graphics. This is generally owed to the successes of games like Street Fighter IV and Mortal Kombat 9, installments from classic 2D Fighting Game franchises that were able to revitalize the genre after a downward slump during the Turn of the Millennium.

See Fighting Series for the non-video game equivalent. Super-Trope to Platform Fighters, which are based more on dynamic stage elements and maneuverability, and often allow more than two players at a time. Another Sub-Trope is Mascot Fighter, which is distinguished by having characters drawn from one or more pre-existing franchises and which usually overlaps with Platform Fighter. Wrestling Game is another Sub-Trope, with more realistic fighting style and aiming to replicate a Professional Wrestling show

If you walk around a level fighting against many opponents at once using techniques similar to a Fighting Game, it's a Beat 'em Up. Though fighting games were once commonly described as 1-on-1 beat-'em-ups, and there were some attempts in the '80s, before fighting games became popular, to mix the two genres, nowadays they are regarded as different as apples and oranges.

For the tropes generally common in these games, see Fighting Game Tropes.