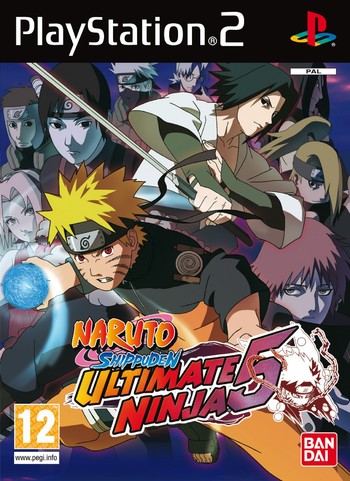 Naruto Shippuden: Ultimate Ninja 5 is a fighting game developed by CyberConnect2 for the Naruto franchise exclusive for the PlayStation 2. It is the fifth and last PS2 installment of the Ultimate Ninja series and the sixth overall. It was released in 2007 in Japan and 2009 in the West, although the game never saw release in North America because of dubbing issues.
Advertisement:

The game primarily focuses on adding content while still using its predecessor's engine. Support characters returns for the first time since Naruto: Ultimate Ninja 2 and is now called at will (subject to meter restriction), rather than appearing from time to time; this will be the basis for the support system in the Storm series. The game also sees the return of collaborative Ultimate Jutsu from Naruto: Ultimate Ninja 3 and introduces collaborative normal Jutsu.

Master Mode starts with the Kazekage Rescue Arc and continues until the end of the Tenchi Bridge Reconnaissance Arc. Hero Mode has been removed, making this the first game not to feature Part I story in any way, although Part I characters are still available.