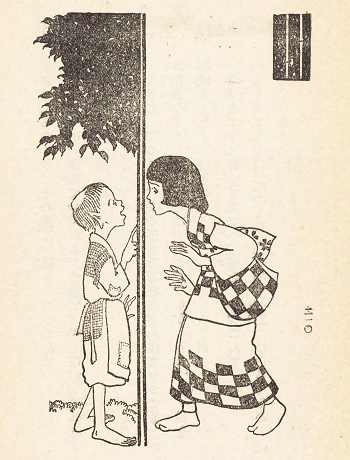 Hello, May I Borrow a Cup of Sugar? And the whole of your skin? I've got a school project, you see.
Advertisement:

Urikohime and the Amanojaku is a Japanse Fairy Tale of the type that starts with a childless couple finding the protagonist as a very small baby. Here that baby is Urikohime (瓜子姫), meaning Melon Seed Princess, for she is discovered within a melon.note Technically, "瓜" covers all cucurbits, but the specific fruit in the tale is always identified as a melon. The titular amanojaku is the villain of the story. Amanojaku are youkai commonly used in depictions of divine heroes as the evil entities those heroes subdue, but rarely do classic stories incorporate amanojaku. Urikohime and the Amanojaku is the best known tale to feature this youkai.

The couple adopts Urikohime and she grows up to be a fine young lady, reputed for her beauty, her song, and her weaving. One day, the couple has to leave Urikohime home alone and instruct her not to open the door for anyone. This is when the amanojaku strikes. It convinces Urikohime to open the door just a little bit and that is enough to force it open in full.

In versions generally told in West Japan, the amanojaku strongarms Urikohime outside, undresses her, and ties her up in a persimmon tree. Then it dons her clothes and shapeshifts into her image. Upon the couple's return, the amanojaku pretends to be their beloved daughter and takes place in the litter readied for her. The group doesn't get far before either Urikohime's voice or those of the birds taking pity on her warn of the deception. The amanojaku is decapitated on the spot, staining the roots of the millet red. In versions common to East Japan, the story is much more grim. The amanojaku murders Urikohime, flays her to disguise itself in her skin, and consumes the rest of the evidence. Either curious behavior by the amanojaku betrays it or Urikohime's soul reincarnated as a bird reveals the deception (a common motif in folklore also found in The Brothers Grimm's story "The Juniper Tree"). The amanojaku is killed, staining the roots of the proso millet red.

While Urikohime's fate is region-bound, the further story variations are not. Another major one is the presence of a prince. In case he's not part of the fairy tale, the litter is readied for Urikohime to take her to a festival and the amanojaku is killed by Urikohime's father. In case the tale includes a prince, Urikohime is to marry him and the litter is to transport her safely to the palace. The amanojaku is killed either by guards or the prince. As well, instead of acting for evil's sake, the amanojaku goes after Urikohime for political influence. Incidental story variations include Urikohime's origin not being mentioned, the villain being a wolf instead of an amanojaku, the amanojaku also being born from the melon, Urikohime falling to her death out of the persimmon tree, Urikohime's parents being tricked into eating her flesh, and the amanojaku's blood also staining the chestnut's and the buckwheat's roots red.

At the very tail end of the 1970s, a Bloody Mary-style Urban Legend developed from the East Japanese version of the fairy tale. It had its popularity in the first half of the 1980s and goes that if one says "Urikohime" in front of a mirror at 12 o'clock, Urikohime's resentfulness will manifest and kill the one who summoned her.

See also Momotarō, with which Urikohime and the Amanojaku occasionally exchanges traits.