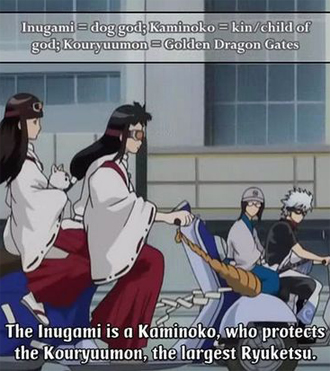 Yeah... What He Said.note Ryuketsu or "dragon holes" is a feng shui term referring to a geographical location where spiritual energy (or qi) converges
Advertisement:

The practice of not translating certain terms or words because the translator can find no satisfactory equivalent in the target language. This can be because the term is specific to the origin culture, and translation would lose a lot of meaning. Less often, it's just because the two languages use vastly different grammatical terms, which could lead a translation to sound odd, outdated, or just weird. Translation is difficult, after all — it's more art than science, and it's remarkably easy to screw up. This trope tries to resolve this by leaving certain words untranslated, on the assumption that the audience will understand it better that way.

This is most common in subtitled works, especially with Anime. Anime has long had issues with Bowdlerized dubs, and fans have sought fan-made alternatives to get a better sense of the original work. Japanese is a particularly tricky language to translate into English, so fansubbers will leave things like honorifics untranslated and assume that the audience will follow. For the most part, that isn't a bad idea; even some official translators will keep the honorifics, because the way characters address each other reveals a lot about their relationships with each other. But where fansubbers fall into this trope is that they greatly expand on things they claim "can't be translated", resulting in things like greetings and stock phrases being left untranslated as well. Whether or not the audience will understand these depends on their level of immersion in the fandom (i.e. how much they use Gratuitous Japanese).

It can also be a useful escape if a concept is considered to be too touchy to escape censorship; a Bilingual Bonus may be enough to sneak past the radar, and the fandom will just treat it as jargon (and sometimes consider it a unique, untranslatable concept). Sometimes it can also just be that, given the context of the work, leaving it untranslated just sounds more right—shows about martial arts have a particular tendency to not translate the names of techniques, because it lends them a sense of mystique where a literal translation would just sound dorky.

See also Aliens Speaking English, Mascot's Name Goes Unchanged and The Song Remains the Same. Contrast Translate the Loanwords, Too, where the translator translates something which wouldn't need changing.

The trope's name is a play on the common Internet phrase Too Long; Didn't Read.