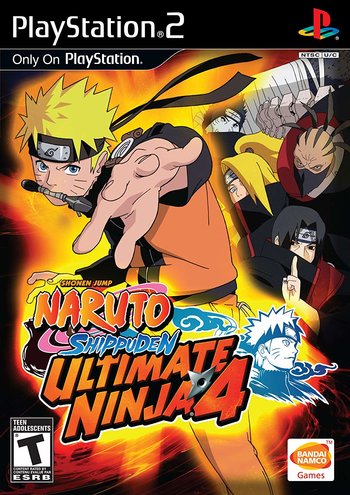 Naruto Shippuden: Ultimate Ninja 4 is a fighting game developed by CyberConnect2 for the Naruto franchise exclusive for the PlayStation 2. It is the fourth PS2 installment of the Ultimate Ninja series and the fifth overall. It was released in 2007 in Japan and 2009 in the West. As its name implies, the game is the first of the series to jump into the Part II/Shippuden storyline.
Advertisement:

The 2D game system is retained with several changes, most notably a condition-based Ultimate Jutsu. The graphics have been overhauled and takes more cue from the anime, rather than the manga. The sandbox-like Ultimate Contest has been replaced by the action-adventure Master Mode, where the player controls Naruto to explore various locales, complete quests, and battle enemies.

Master Mode starts with a filler story called the "Black Shadow" arc, followed by Part II chapters from 245 to 260 of the Naruto manga. Despite focusing on Part II, the game includes a condensed version of Part I storyline in the form of Hero Mode, similar to Hero's History from Naruto: Ultimate Ninja 3, and Part I characters are still available. Note that Kakashi Gaiden (c. 239-244) is not featured in any capacity, outside of the return of the Yellow Flash.