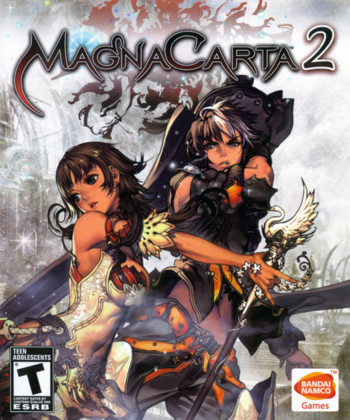 "Absolutely do not die."note From left to right: Zephie and Juto
Advertisement:

Magna Carta 2 is a South Korean RPG video game. It is the sequel to Magna Carta: The Phantom of Avalanche and Tears of Blood.

Juto is your typical amnesiac Idiot Hero, carefree and without purpose in life. He spends his days lazing around his home of Highwind Island being prodded by his guardian Melissa and trying to overcome a crippling aversion to swords. His peaceful days come to an end when a war between two armies vying for control of the throne of Lanzheim crashes onto the shores of his home.

About a year prior, Former Prime Minister Schuenzeit has assassinated the queen and seized the throne for himself. Princess Rzephillda—the late queen's last surviving heir—raises an army to oppose him, to find themselves out-gunned by the powerful Sentinel weapons deployed by Schuenzeit's "Northern Forces". Seeking the secrets to Sentinel creation, Rzephillda's "Southern Forces" follow a tip-off that leads them to Highwind Island. When the Northern Forces, led by a notorious assassin called "Elgar the Regicide", catch up to them, the island is plunged into conflict and Juto is swept into the war.