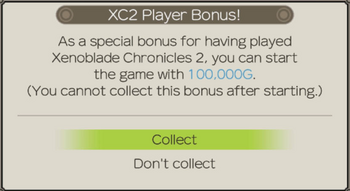 The ability to use old save data (or in rare cases, use of the physical game) from an old game in a new game (often a direct sequel, though unrelated examples aren't unheard of) for a bonus. Mostly, this means a tiny change (such as an acknowledgment of your accomplishments in the first game), or an item that may or may not be useful, but in some RPGs (the main originators of this) it is possible to import the character from the last game, levels intact, to start the new one (the monsters would sometimes be scaled up, of course).

Sometimes, this is a way of avoiding the Bag of Spilling problem. Mission-Pack Sequel games are especially prone to using this, as the sequel is usually built on the same basic code as the previous entry, so it's easy to port over content.

Related is the specific bonuses achieved from linking a handheld with a specific game to a console with another. This began with the Nintendo 64 title Pokémon Stadium, which has a special adapter for importing Game Boy save data. The Game Boy Advance system has a link cable for connecting to the Nintendo GameCube, the Nintendo DS uses its Slot-2 to connect to GBA games and can connect wirelessly to the Wii, and the PlayStation Portable uses a USB cable to connect to the PlayStation 2. However, this can quickly enter One Game for the Price of Two territory if you need both to have a fulfilling experience.

On one hand, this is a fun way to reward players who have played previous games. On the other hand, this can be frustrating to those who don't have the time or money to invest in another game.

Compare to; New Game+ and Another Side, Another Story which reward you for playing the same game again after completing it once; One Game for the Price of Two, when both games are related to each other and released at the same time; Player Data Sharing, when it's data from another player's save rather than your own from another game; and Demo Bonus, which awards a bonus for playing a demo of the game.