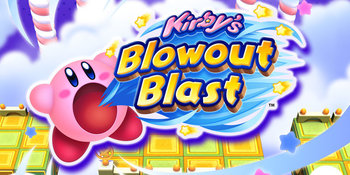 Kirby's Blowout Blast is a spinoff of the Kirby: Planet Robobot sub-game, Kirby 3D Rumble, a three-stage adventure where Kirby fights enemies in a full 3D environment, each stage culminating in a final battle with a form of Masher.

Now Kirby's 3D adventure gives him additional enemies and stages, EX versions of these stages, and a plaza for level selection (similar to Team Kirby Clash Deluxe). There is also amiibo functionality, creating a statue in said plaza that plays different music.

The game was one of several Kirby games released during Kirby's 25th anniversary invoked and appropriately, features numerous callbacks to Kirby's Dream Land, acting as an almost pseudo remake of the game.