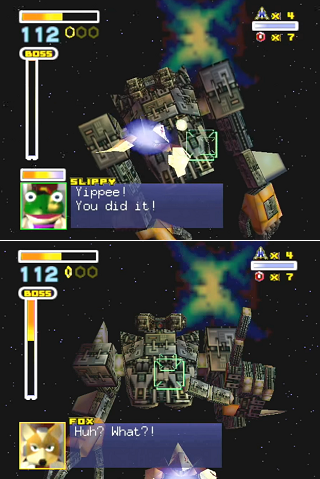 Epilogue Narration: You defeated your arch rival the sinister Warlock. Peaceful days will now return to Vampires and Monsters.
(...five seconds later...)
Warlock: Ha! Ha! Ha! ... I have returned!
Vampire: ...Warlock!...
Warlock: You thought you defeated me. I'm much stronger than you expected. Now I will destroy you!!
Vampire: ...What!!?...
— Monster in My Pocket
Advertisement:

So, you've defeated the Final Boss after a long and hard battle, the good old victory music that played after defeating the other bosses kicks in, and your character does his usual dance...

But then, the music suddenly grinds to a halt as the boss suddenly gets back up again and reveals his One-Winged Angel form. Your character stops his dance, realising he now has to fight a much bigger, badder form of the boss he was fighting. This is when a boss pulls a Victory Fakeout.

Subtrope of Hope Spot and Sequential Boss. If the enemy feigns surrender in the process, this trope overlaps with I Surrender, Suckers. Compare Your Princess Is in Another Castle!, Trick Boss and Don't Celebrate Just Yet. If the player character dies during an actual victory scene, it's a Kaizo Trap. Contrast Fission Mailed.

These examples are pretty much all unmarked spoilers. Proceed with caution.

Once the dispenser is destroyed, Mario and Olivia celebrate as they always do when winning a battle, only for the Tape to reveal he was not finished off.

Once the dispenser is destroyed, Mario and Olivia celebrate as they always do when winning a battle, only for the Tape to reveal he was not finished off.