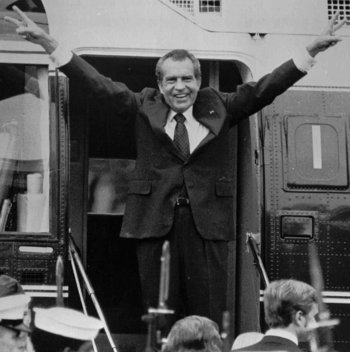 An ironic twist.
"V for victory, dot dot dot dash
Hitler lost his little mustache
If you find it, let him know
And he'll give you lots of dough"
Advertisement:

Sometimes, a character, feeling victorious and all, just feels like yelling "VICTORY!", or busting a few moves. But for one reason or another, they want a less ostentatious method to celebrate. In that case, they stick their middle and index fingers upwards, as if forming the letter "V". Sometimes, they'll do it with some exclamation, but not necessarily.

In Japan, the V sign can also signify that the person making it is being photographed. This pops up in anime quite a bit, sometimes accompanied by the character saying "V". May have been popularized as a result of the occupation after WWII.

In the United Kingdom and Commonwealth countries, when done with the palm facing inward, it is an offensive gesture — slightly less offensive than Flipping the Bird in the United States — sometimes known as "throwing the deuces" or "[flipping/flicking] [off] Vs".

During World War II, Winston Churchill popularised its use as a "Victory" sign (for V as in victory) initially with palm inwards and later (once informed that inward was offensive) in the war palm outwards.

The palm-facing-outward version of the sign has also been used to mean "peace", especially by the 1960s/1970s counter-culture.

Contrary to popular belief, the "palm-inwards" version has nothing to do with medieval English (or Welsh, depending on the story) archers showing defiance. Maybe. Nobody really knows for sure, but it'd be cool if it was true.

A form of Crazy Cultural Comparison. Compare Victory Pose and Happy Dance, where someone wants to be a bit more showy with their celebration. For the single-finger version, see Flipping the Bird. Not to be confused with a certain OTHER two-fingered gesture, though the two look the same.