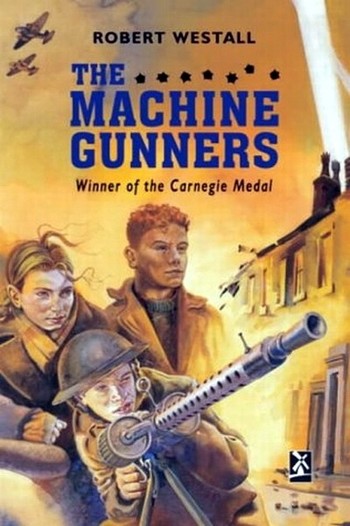 "Some bright kid's got a gun and two thousand rounds of live ammo. And that gun's no peashooter. It'll go through a brick wall at a quarter of a mile."
— Sergeant Green, The Machine Gunners
Advertisement:

The Machine Gunners, published in 1975, was the first novel written by English childrens and Young Adult author, Robert Westall. Based on his own experiences as a child in Tynemouth during The Blitz, the book is the story of Charles "Chas" McGill, a young schoolboy who collects 'war souvenirs'; pieces of fallen bomb, shrapnel from Anti-Aircraft fire, and other detritus of the bombings.

During one air raid, a German Heinkel bomber is shot down and crashes in the woods near to McGill's home. He finds it one morning and discovers that its rear turret machine gun is still in place, intact and in full working condition. This, he decides, will be the finest war souvenir he's ever collected. It is only during the next bombing that he gains another plan, to gather his friends together to create a fortress of their own to fight the Germans themselves.

But the police and his teachers know someone at the school stole the machine gun from the wreck, and McGill is one of the prime suspects. How long can they keep the gun and its hiding place a secret, from both the adults and McGill's collection rival, school bully Boddser Brown. Things are further complicated when the gang attempts to shoot down a Me 110, causing it to actually be shot down by a trio of three Spitfires. The rear-gunner bails out and manages to blunder into the children's secret fort and be captured by them. They can't let him go; in case he tells the authorities about them. What to do with a captured German airman and a stolen machine gun, especially when the signal of a German invasion comes.

The Machine Gunners was adapted by the BBC for television in 1983 and again for radio in 2002. A stage play by Westall also exists and had a run at the Polka Theatre in London, commissioned by the Imperial War Museum. The book won the Carnegie Medal in 1975 and was voted in 2007 as one of the ten most important children's novels of the last seven decades by the Carnegie Medal panel.

A sequel Fathom Five is set two years later, in which Chas and his friends hunt for a German spy.