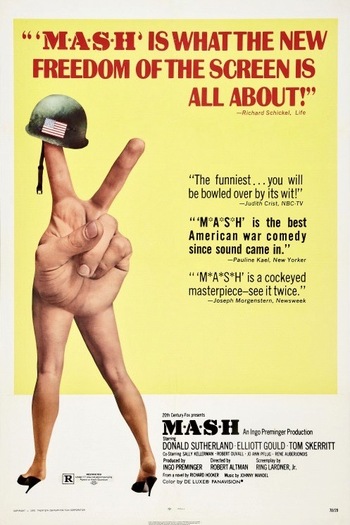 "This isn't a hospital, it's an insane asylum!"
— Maj. "Hot Lips" Houlihan
Advertisement:

A 1970 comedy film based on Richard Hooker's novel, M*A*S*H was the first major hit for its director, Robert Altman, and the inspiration for the popular and long-running television series a few years later.

In the midst of the Korean War, the 4077th Mobile Army Surgical Hospital, commanded by Lt. Col. Henry Blake (Roger Bowen), is tasked with patching up the wounded. A pair of fresh draftee surgeons, "Hawkeye" Pierce (Donald Sutherland) and "Duke" Forrest (Tom Skerritt), arrive on the scene; defying all conventions, and soon accompanied by fellow surgeon "Trapper John" McIntyre (Elliott Gould), they proceed to "fix up" the mood in the hospital with their brand of wild black humor.

The film's plot — such as it is — consists of various episodes dealing with the surgeons' on- and off-duty escapades, including their personality clashes with their erstwhile tentmate, Maj. Frank Burns (Robert Duvall), and with the newly-appointed head nurse, Maj. "Hot Lips" Houlihan (Sally Kellerman); Hawkeye's romantic pursuit of nurse Lt. "Dish" Schneider (Jo Ann Pflug); the depression and "assisted suicide" of dental surgeon "Painless Pole" Waldowski (John Schuck); the drafting of the surgeons' South Korean houseboy, Ho-jon (Kim Atwood); Hawkeye and Trapper's trip to Tokyo to operate on a Congressman's son (and play some golf); and a football game against a team from the 325th Evacuation Hospital.

Winner of the Palme d'Or at Cannes, and nominated for five Academy Awards (winning for Best Adapted Screenplay). Also notable as one of several different 20th Century Fox films alleged to have been the first pre-recorded videocassette to roll off the assembly line at Magnetic Video in the fall of 1977.