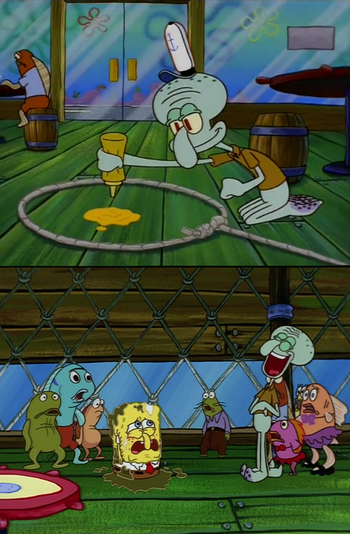 "April Fools, jerk."
As a mad man who casteth firebrands, arrows, and death, so is the man that deceiveth his neighbour, and saith, Am not I in sport?
— Proverbs 26:18-19, The Bible
Advertisement:

OK, so you love a good joke? Probably not anything with laxatives or more deadly possibilities, but just the simple and mostly innocent classics designed to be one and done.

Oh, look, here comes your next mark. Wait for just the right moment, and... BINGO! Your little Silly String Spray, cream pie, Trick Bomb (particularly a Stink Bomb), or water cannon was a direct hit, and the mark never saw it coming.

But hold up there... is he upset or something?

Hello?! You just smashed the Nice Guy's ultimate Berserk Button: the disruption of his peace.

Not everyone has your sense of humor, including your mark. He might not have any issue with pranks themselves, just so long as he's not a part of them. Perhaps he learned the painful way not to disregard the potential mood of his target. Or you simply didn't match the prank to the prey. Whatever the reason — and there are plenty — he's going to show you firsthand why it's a very wise idea to Beware the Nice Ones.

While he's not so likely to engage in Revenge by Proxy — and less so to do anything that could provoke an Escalating War because of it — you will be doing damage control duty. On his terms.

If this is how The Prankster or resident troublemaker ends up getting A Taste of Their Own Medicine, there is a good chance of seeing Nothing Is the Same Anymore on their end (i.e. their opinion of pranks is permanently soured).

When considering an example, the time or location of the prank does not matter (meaning it does not have to be part of an April Fools' Plot to count). The way the victim responds to the prank is the key to its qualification.

If, however, the outcome is legit injury, or any death at all (particularly if the victim is Driven to Suicide or a Roaring Rampage of Revenge), put it in Deadly Prank instead.

Since this trope involves an In-Universe reaction, not an Audience Reaction, Real Life examples should not be added lightly.

As part of an April Fool's prank on Homer, Bart shakes up a beer can so it'll spray in his face. Unfortunately, due to overshaking it with a paint mixer, it ends up exploding.

Example of:
Soda Can Shakeup

As part of an April Fool's prank on Homer, Bart shakes up a beer can so it'll spray in his face. Unfortunately, due to overshaking it with a paint mixer, it ends up exploding.