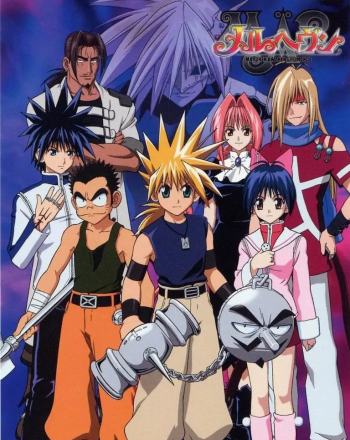 A shonen action manga/anime by Nobuyuki Anzai, the creator of Flame of Recca. The manga ran in Weekly Shonen Sunday from 2003 to 2006, and the anime aired from 2005 to 2007.
Advertisement:

Poor Ginta just can't get a break. He's nearsighted, does poorly in school, isn't athletic, and to top it all off, is really short for his age. He has quite the imagination, however, having had the same dream of the fantastical world of Märhaven, where he's the hero that saves the day, a total of 102 times. This only makes him a bigger laughingstock at school, except for his childhood friend Koyuki who very much enjoys Ginta's imaginary adventures. Then one day, a mysterious portal appears in the middle of his class room and its guardian summons Ginta to the world beyond. With little hesitation, Ginta steps through to find himself in the land of his dreams. Not only is Märhaven real, but Ginta is now strong and agile and best of all, no longer needs his glasses to see! Thus begins Ginta's adventures in Märhaven.

Early on in the plot, the action revolves around fighting monsters and bandits and introducing the other main characters. The plot then takes a darker turn when the Chess declare war on all of Märhaven which culminates in an epic tournament with the fate of Märhaven hanging in the balance.

The anime's North American release ran on Cartoon Network's Toonami (after a more consistent run on Toonami Jetstream), however schedule irregularities ensured its tenure was short lived. Due to that, the English dub was discontinued as well.