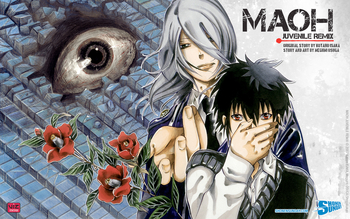 Maoh: Juvenile Remix is a manga published in Shonen Sunday (the same people that licensed Flame of Recca.) The original story was written by Kotaro Isaka. The art and current story are done by Megumi Osuga.

The story takes place in a fictional Japanese city. Recently, the Anderson Group has moved into town and has been launching a bunch of big building projects. The only problem is that they're taking away a lot of the locals' jobs. To top it all off, there's quite a bit of gang violence in the city. But to the people's joy, someone steps up to the plate to stop them: Inukai. He and his vigilante group, Grasshopper, want to clean up the city and put an end to the Anderson group's tyranny once and for all.

You'd figure that the story would be about Inukai's exploits, right?

The story is about Ando, a high school student who has the power to make others say out loud what he’s thinking. Initially, he thinks that Inukai is really cool. When he thinks that Inukai is about to be attacked, he follows him and tries to help. It's then that he sees Grasshopper's dark side. He then notices that Grasshopper is easily manipulating the people of the city and changing his friends. When no one else will, Ando decides to take matters into his own hands.