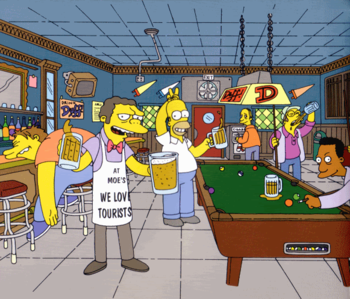 Welcome to Uncle Moe's!
"As a base of operations, you cannot beat a fucking saloon."
— Al Swearengen, Deadwood
Advertisement:

A place where the main characters spend much of their time, usually a bar, diner, cafe, coffee house, ice cream parlor or fast food restaurant. Extra credit if the place is named after the owner and he's a recurring character. Can also be a Malt Shop or Greasy Spoon. In any case, it's supposed to serve as a place to kill time, have fun, and/or talk. Sometimes it even serves as a show's primary setting. Parties, town meetings, or other public events will often take place here too.

In general, standards of conduct are far looser in fictional hangouts than they are in real life. At these places, you can expect fights to break out, people to walk inside wearing unusual costumes (even when it's not Halloween), and people shamelessly screaming at the top of their lungs... with none of the waiters or other patrons even noticing or caring. Also, the seats/couches/spot the characters typically occupy are never taken by others, as though they exude a pack-like "get off my turf!" vibe when approached.

Commonly used in sitcoms (especially those with an ensemble cast - where making somebody's home the "local hangout" would likely shift the series too far in his/her favor) because building only one hangout set saves on the budget and retains comedic simplicity. The British version is My Local. The Medieval European Fantasy version is The Need for Mead. Might overlap with Good-Guy Bar, depending on the protagonists and setting.

Compare to The Couch and Hub Level. Sometimes a Burger Fool, but the latter trope is more focused on the employees while this is mainly about customers.

Might include such amenities as a fireplace, a storyteller or a singer, a sauna, Board Games, wagering, dancing, books, internet access or whatever, depending on the local culture and the owner's tastes. Often used as a Framing Device for short stories, or a base for adventurers to gather.