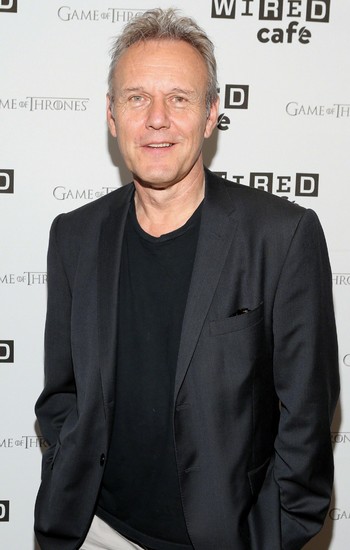 "I'm fortunate because people can't put a label on me, which I embrace wholeheartedly."
"All through childhood, I dressed up. My Christmas present was always a new dressing-up outfit, that my mother – who was a brilliant seamstress – would make herself. At playgroup the woman who ran it took my parents aside one day and said, we love it when Anthony comes in dressing-up clothes, but it would be really nice to meet Anthony himself one day – he gets absolutely immersed in whatever character he’s dressed up as."
Advertisement:

Anthony Stewart Head (born 20 February 1954 in Camden town, London) is a British actor best known as his role as Rupert Giles in Buffy the Vampire Slayer, and more recently as King Uther in Merlin. He also had a short role as Will's terrible dad in The In Betweeners.

He also has released several albums (Music for Elevators in 2002, and Staring At The Sun in 2014), played Nathan in the Rock Opera Repo! The Genetic Opera and served up glorious sides of ham as the evil guardian Mr Gently Benevolent in Radio 4's Bleak Expectations. He also played Michael the Prime Minister in sketch show Little Britain ("It's not the real prime minister of course, it's just that bloke from Buffy"). Throughout the early 2000s he was a perennial fan suggestion as the actor who should be cast as the Doctor if Doctor Who were revived. When it was, he appeared in the episode "School Reunion" as Villain of the Week, Mr. Lucas Finch. In the wider Who franchise he played Large Ham Grayvorn in the Big Finish Doctor Who Excelis story arc, and another villain as the voice of Space Pirate Balthasar in the animated story The Infinite Quest. He occasionally turns up in Cabin Pressure as Douglas's old friend Herc Shipwright. More recently, he played the Mad Scientist Paracelsus in Warehouse 13, obsessed with immortality. Before he was famous he was also in an episode of Highlander, sadly not as an Immortal, however.

Long before he was Giles, he was most recognisable for being half of an insufferably smug Will They or Won't They? couple flirting over instant coffee in commercials for Nescafé and its American equivalent Taster's Choice.

Oh, and he played Dr. Frank-N-Furter in some performances of The Rocky Horror Show.

He has a brother who is a veteran of musicals on the West End, named Murray Head. Murray is better known for his performances in the original Jesus Christ Superstar and his biggest chart hit, "One Night in Bangkok" (from a far less successful musical called Chess).

He has been with his partner Sarah Fisher since 1984, and they have two daughters, Daisy and Emily, who like him are actors.