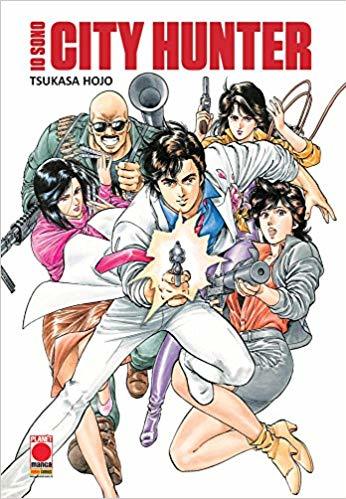 Ryo Saeba is a "sweeper" (combination of hitman and private eye) who uses his Improbable Aiming Skills and all-round badassery to deal with crime in Tokyo. He also happens to be a loony Chivalrous Pervert.

The City Hunter manga by Tsukasa Hojo ran in Weekly Shounen Jump from 1985 to 1992. It spawned four anime series, several OVAs and two live-action movies (one from Hong Kong starring Jackie Chan and a French one much later). It is a schizophrenic action manga with heavy elements of Sex Comedy.

Ryo Saeba is an apparent orphan who was brought up in a war-torn village in Central America. At a young age, he was used as a test subject for a unique LSD derivative which resulted in him developing Super Reflexes. He trained these reflexes as a guerilla in that country's civil war before escaping to the United States and thence to Japan. In Japan, he teamed up with former police detective Hideyuki Makimura to form the "City Hunter" sweeper agency; ostensibly, he's a Private Detective, but will go further for certain clients - he's also a Hitman with a Heart.

The "comedy" comes into play whenever Ryo sees a beautiful woman. Somehow, that LSD derivative had as much of a positive effect on his sexuality as it did his reflexes. He has a sex drive of truly epic proportions, and a physique guaranteed to make just about any woman happy to be its focus... which is just about the only Restraining Bolt this Lovable Sex Maniac has - he knows that he's everything he claims to be, and is thus always patient enough to wait until the girl's in the mood to get wild. He's not above what most would consider outright sexual harassment, however... as long as the girl seems amused by it.

In other words, What If? Ataru Moroboshi was James Bond - right down to being the hero of his own series!

Early in the manga, Hideyuki dies on a case, asking Ryo to look after his much younger adoptive sister, Kaori. Kaori, a tomboyish Tsundere (who is of course Beautiful All Along) quickly takes her brother's place as Ryo's partner and business manager. She is decidedly unimpressed by Ryo's lecherous ways and often interrupts his seduction attempts. Despite this, the two quickly form a strong emotional bond - though Kaori is never sure whether Ryo's excuse for not acting on their easily noticed Unresolved Sexual Tension is really because It's Not You, It's My Enemies, or if her lecherous partner is just too damned horny to ever settle down.

Important recurring characters include "Umibozu", a rival sweeper who has ties to Ryo going back to Central America, and Saeko Nogami, the daughter of the police chief and a police detective in her own right. Saeko often hires the City Hunter team to look into affairs the police can't publicly investigate or cannot prove that an actual crime has occurred.

The standard procedure for hiring City Hunter is to leave a message for "XYZ" at the Shinjuku train station, after which Kaori makes a preliminary investigation before introducing the prospective client to Ryo. Naturally, many of their cases bypass this procedure. (Especially if the client is a beautiful woman.)

The manga Angel Heart takes place in an Alternate Universe in which Kaori has died and her heart was transplanted into the new story's heroine, who then encounters an older Ryo Saeba.

, slated for theaters in February 2019, 20 years after the last one. In April 2019, Sunrise revealed that Discotek Media has licensed not just this movie, but also all other TV shows, OVAs and previous films in the series.

An adaptation starring Jackie Chan was released in 1993, famous for Jackie as Street Fighter characters.

Ryo appeared as a playable character in Jump Force.

For the Korean Series of the same name, see The City Hunter.

Kaori's blush is mistaken for a fever.

Kaori's blush is mistaken for a fever.