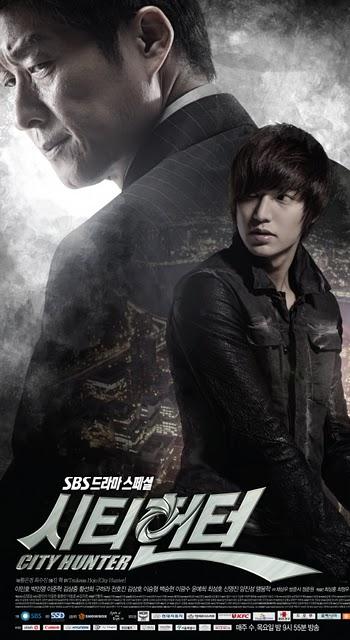 Lee Jin Pyo and Lee Yoon Sung, multigenerational badasses
"[Park] Mu Yeol is dead. I will take the child and support him... Start all over again. You must be happy."
— Lee Jin Pyo, after taking Lee Yoon Sung as a baby in Seoul, 1983.
Advertisement:

City Hunter (시티헌터) is a 20-episode Korean Series that aired on SBS from May to July 2011. It shared very few details with the Japanese work of the same name. There were also reports that the mangaka himself was involved in the production of the South Korean version after he personally refused other TV adaptations for City Hunter in the past few years.

In 1983, 20 South Korean commandos were deliberately killed by friendly fire after a successful raid on North Korea in retaliation for the attempted bombing in Burma. The sole survivor, Lee Jin Pyo, swears revenge on The Council of Five, a group of high-level politicians that ultimately made the decision to abandon the team in order to avoid any political backlash. To that end, he kidnaps the newborn son of his best friend, who had died in the raid to save Jin Pyo's life. He molds the child into an instrument of Revenge, teaching him martial arts, firearms and other military tactics before sending him abroad to learn electronics and surveillance techniques.

Flash forward to 2011 in Seoul. The child has grown into Lee Yoon Sung (Lee Min Ho) a talented graduate from MIT, hired by the Blue House (presidential palace) into their IT department. After gaining immense wealth as a drug lord, Lee Jin Pyo has acquired the cover identity of a respected businessman specializing in antlers for the Asian medicinal market.

Kim Na Na is a female Presidential Security Service agent and part of the Protection Team for the Blue House. She also has a mysterious link to the past in the form of Lee Yoon Sung's good friend and assistant, Baek Shik Joong.

Investigating corruption with idealist fervor is Kim Young Joo, a prosecutor with the police department. His father is also one of The Five.

As Yoon Sung funnels the evidence of wrongdoing through Young Joo, he is given the persona nickname "City Hunter" by the police, as a shadowy vigilante, who skirts the law but also helps to destroy those in power who feel above the law. The corruption may even go all the way to the Blue House itself.