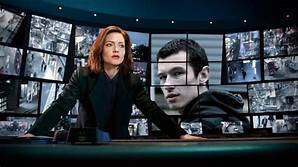 A Conspiracy Thriller that first aired on BBC One in autumn 2019, The Capture is about a Shell-Shocked Veteran, Shaun Emery (Callum Turner) who is implicated in the kidnapping of his barrister (Laura Haddock) by CCTV, shortly after being freed by video evidence from a war crimes tribunal. The ambitious police officer Rachel Carey (Holliday Grainger), who is sleeping with her senior officer (Ben Miles), is put on the case and soon believes there is more to the situation than meets the eye. Famke Janssen and Ron Perlman also star.
Advertisement:

In June 2020, the show was announced to have a second season.

The Capture contains examples of: