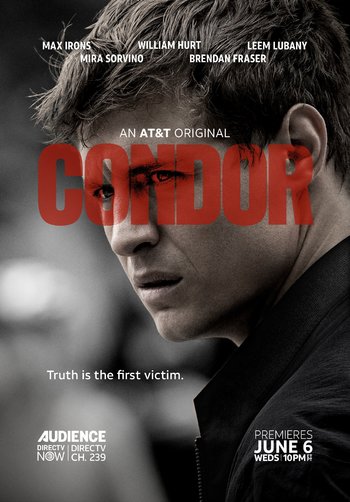 Condor is a 2018 television series, based on the Three Days of the Condor movie and the original Six Days of the Condor novel by James Grady. It stars Max Irons, William Hurt, Leem Lubany, Mira Sorvino and Brendan Fraser with the show created by Todd Katzburg, Jason Smilovic and Ken Robinson. The show first aired on the Audience Network before its shutdown and is now on ePix. It's been renewed for a third season as of 2022.

In the first season, Joe Turner is a CIA research analyst who works at IEP Analytics, which serves as a cover for CIA research analysts in research and analysis of data to investigate potential terrorist threats against the United States. When assassins target the IEP building, Joe is on the run and is framed as the mastermind of the murders of his fellow analysts while he tries to investigate and figure out who wants him dead.

The second season starts with Joe living in Hungary as a means of getting away from the aftermath of the conspiracy. After American forces in Ukraine were targeted, a defecting SVR officer named Vasily Sirin warns Joe that a CIA double agent was working with the SVR in Moscow to leak details of CIA operations in Eastern Europe. With Joe's uncle Bob dead, he returns back with Vasily in order to find who's the double agent and what's the significance of Vasily's relationship with Bob aside from being a CIA asset.