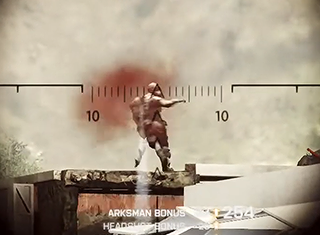 "Everything above yer' neck's gonna be a FINE red mist!"
— The Sniper, Team Fortress 2
Advertisement:

This is the polar opposite of Pretty Little Headshots, usually found in military fiction and gorier video games. As the above quote says, it's after a sniper has shot someone, and their head "pops" into a bloody cloud, which, from a distance, appears to be pink. Usually some part of the head is blown off in the process. This type of headshot is almost invariably seen from the sniper's point of view.

The thing that keeps this from falling into Ludicrous Gibs is that it actually happens, although it requires a sufficiently high-velocity bullet, usually a rifle bullet, to produce the effect. Typical pistol bullets can (and often do) produce a blood-splattering exit wound in headshots, but the vaporization of enough blood and brain tissue to produce an actual mist requires a supersonic velocity of the sort most typically found in rifle bullets (thus partially validating the Pretty Little Headshot, at least if the shooter is using a pistol). The .357 Magnum suicide of R. Budd Dwyer

on live television could be clearly seen to produce no visible pink mist, despite involving a powerful pistol caliber to the brain at point-blank range.

The most easily accessible real-world evidence for Pink Mist is surely the Gross-Up Close-Up provided by the Zapruder film of the Kennedy assassination. A 10.5 gram rifle bullet traveling at 2,300 feet per second into a large, homogenous mass with the consistency of a custard pie can be clearly seen to support the trope, although not quite as strikingly as one might expect.