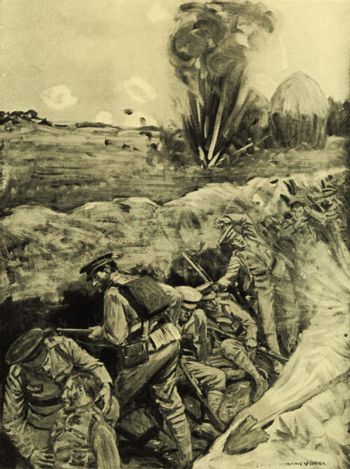 "Gordon, I can't move! These snipers got me pinned down!"
— Barney Calhoun, Half-Life 2
Advertisement:

A situation where a character or party is pinned down by enemy fire and can't fight back, or sometimes even move, without getting their heads shot/burned/ripped off. This can prevent them from getting to an injured ally the character or group needs to help, stop a shorter-ranged character from getting within range of fighting back, or simply keeping the heroes from moving forward, buying a villain time.

A variant is "cover fire", which means pinning down an enemy when an ally moves forward (usually to the next safe spot, before firing in turn so you can move).

It's often used in video games as well. Ever wondered why enemy soldiers keep shooting at where you last emerged from cover? They're keeping you pinned, probably while they recharge their shields or move into a position where they can kill you.

If it's being used to keep allies from helping a character who is able to fight back, the allies are Locked Out of the Fight.

To progress in "Brothers in Arms", you must use your squad members to suppress and flank enemy units, as shown here in this training video.

To progress in "Brothers in Arms", you must use your squad members to suppress and flank enemy units, as shown here in this training video.