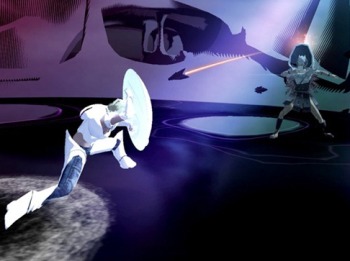 Luckily, My Shield Will Protect Me!
"It isn't for fighting. It's for when the fighting's gone bad."
— Defensive Stance,

The titular command is common in Role Playing Games, where the character assumes a defensive stance that reduces damage received from enemies (usually by half), usually at the expense of not being able to take any other action in that stance. Hence, this command is regarded as useless (especially in turn-based environments where all actions require a full turn), although it can vary from game to game.

Occasionally, however, a boss will have a charged-up super move which is best survived by defending on the turn it fires, leaving players used to ignoring the command clueless as to how to survive. More recent games, recognizing what a Useless Useful Spell defend traditionally was, have attempted to bring back its usefulness by allowing the defend command to have other tactical advantages beyond reducing any amount of incoming damage.

One variation may cause a defending character to become the sole target of enemy hostility, either by shielding the rest of the party (kinda hard to reach them when they're behind a big-ass shield) or to draw enemy attention as the character enters a defensive stance, which comes in handy if used by a character who can Counter-Attack.

Another variation causes the character to evade damage instead of guarding against it; attacks which whiff this way are just as effective as if they were dodged normally, and also useful to counter-capable characters. That said, beware the Always Accurate Attack, which can bypass even this. This version is exclusive to Turn Based Role Playing Games, as more action-oriented games have a dedicated Dodge command instead to replicate this effect.

A third common approach to expanding the use of the defend command is to cause defending characters to also regenerate resources when used. For instance, defend may regenerate a percentage of health or mana each time it is used (don't expect to be able to use it outside of battles). Alternatively, it may regenerate stamina or technique points used for performing more powerful attacks. While this approach will keep defend from being useless, it can go to the alternate extreme of having a party spending as much or more time defending as attacking, either to generate enough mana to heal or build up stamina to perform more powerful attacks. This can, in turn, draw out battles, even otherwise easy Random Encounters, with excessive defending. Whether this is preferable or more strategic then the usual quick all-out attack strategy of most RPGs is dependent on who you ask.

Outside of RPGs, other genre games (notably action games) have their own dedicated "blocking" button. Fighting Games may either have one, or (in 2D fighters) have the player simply holding the "back" button (i.e the opposite direction of where the character is facing). For fighting games especially, some games may have both standard blocking and an advanced form of blocking that is more useful but either harder to do or requiring some resource.

See also Stone Wall, which any character using this command becomes while it's in effect. See also Unblockable Attack, which can break through this. Some variants of Armor-Piercing Attack can also bypass the protection this command offers, especially if they're the Anti-Armor variant which does more damage to defending targets. Contrast Blocking Stops All Damage.