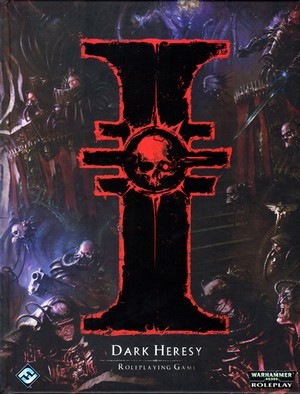 Innocence Proves Nothing.
"Basically you're fucked like in Warhammer Fantasy Roleplay, only instead of dying from blood poisoning caused by a dirty pitchfork you get to have your innards blown across the wall and then subsequently set on fire by a plasma gun (probably your own)."
—1d4chan

Dark Heresy is a Warhammer 40,000 pen and paper roleplaying game published by Fantasy Flight Games using a mechanical system similar to Warhammer Fantasy Roleplay. It has the players assume the role of Acolytes of the Holy Inquisition in the grim, dark future of the 41st millennium, rooting out heresy among the Imperium wherever it may be arise. Notable for having over five consecutive pages entirely filled with Critical Hit Charts.

A second edition of Dark Heresy was released which updated the rules to the version used in Only War. As with Only War Fantasy Flight Games released a fully playable "beta" version for purchase prior to the official release (with people who purchased the beta getting a discount on the digital version of the official release).

See also Warhammer Fantasy Roleplay (its fantasy counterpart); Rogue Trader, Deathwatch, Black Crusade, and Only War (its sister games); and of course Warhammer 40,000, as Dark Heresy necessarily shares a great number of tropes with its parent game. Also check out Adeptus Evangelion, a fan-made conversion for running games set in the Neon Genesis Evangelion universe. Also see Servants of the Imperium, a Gaming Webcomic based on this game.

As of February 2017, Fantasy Flight Games has lost the license to publish games based on Games Workshop's IP, leaving Dark Heresy and its sister games out of print, although digital copies will be made available on DriveThru RPG. As of August 2017, Ulisses-Spiele, the publishers of The Dark Eye, have gained the Warhammer 40k license and are creating an entirely new RPG, Wrath And Glory, which uses a different system (although thankfully they are still selling this game and its sister lines at this moment). In 2019, Cubicle 7 took over the rights to publish the various Warhammer RPGs including the English editions of Wrath And Glory.