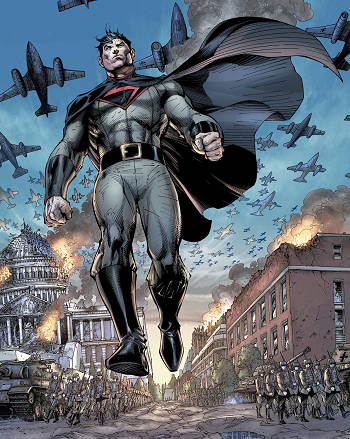 "I tried so hard to be there for you. To serve you. I tried so hard to make sense of you and what you needed from me. I wanted to be there. I wanted to serve. But then it occurred to me. I asked myself the incredibly obvious question: why am I so much more than you? Why are you so small and I am so much more? I then realized that I am not your servant. I am your king."
— Supershock, Powers
Advertisement:

Usually supervillains don't care about who is superpowered and who is not. They just use their abilities to commit crimes or Take Over the World for egotistical reasons. This guy, however, is specifically motivated to get power so those like him would rule, not just for himself.

This is a bad guy with superpowers who believes that this gives them the right to rule over non-supers. The motives of such a villain may be that of a Social Darwinist who believes superpowers to be the ultimate example of Might Makes Right, or someone who thinks non-supers should be ruled "for their own good". They may even see supers as a nascent Master Race on a higher evolutionary level than non-supers or take after a certain racial demagogic party when the author wants to make the implications especially transparent. May develop a literal God Complex as well or come to think of themselves as an Ultimate Life Form. Obviously, this sort of villain is a manifestation of the idea that the existence of individuals with superpowers is inherently bad for those who do not possess them.

A Sub-Trope of Fantastic Racism and Beware the Superman. The Opposite Trope to Pro-Human Transhuman, a superpowered individual who considers themselves equal to Muggles. Sister Trope to Transhuman Treachery and Screw the Rules, I Have Supernatural Powers!. Contrast Muggle Power for the inverse of non-supers seeing themselves as superior to supers. See also Smug Super, when someone with superpowers merely uses them to gloat. A Superman Substitute often goes this route when an author wants to deconstruct the Superman archetype without incorporating the big blue boy scout himself. Pretty much guaranteed to be a Visionary Villain.

No relation to Sub-Par Supremacist, who falls far below the standards of even the Muggles he claims to be better than.

Empowered with telekinetic abilities, Andrew Detmer finds himself driven to increasingly irrational behaviour by his abusive home life, and gradually begins to espouse his own superiority as an aspect of natural law.

Empowered with telekinetic abilities, Andrew Detmer finds himself driven to increasingly irrational behaviour by his abusive home life, and gradually begins to espouse his own superiority as an aspect of natural law.