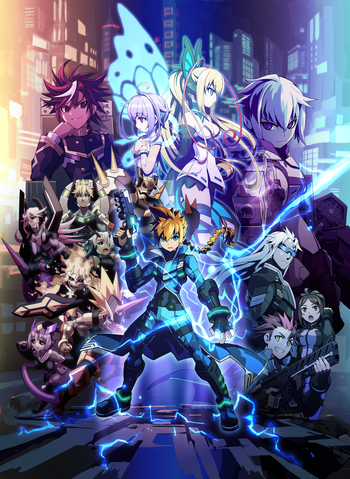 20 Minutes into the Future, people possessing a supernatural power known as Septima (Sevens in Japan) start appearing, and the general populace quickly comes to fear these people with extra-personal power. The Sumeragi Group, an enormous Japanese conglomerate with world-wide influence, tasked itself with bringing peace and order to the country by rounding up these people known as adepts (psychics in Japan). But, unbeknownst to the world, this "Adepts Protection", as the conglomerate calls it, takes the form of concentration camps, where the adepts have horrific experiments performed on them on a daily basis. Opposing them is a resistance group known as QUILL (FEATHER in Japan). Upon learning of the atrocities done by the Sumeragi Group, they started working as a human rights organization to protect the adepts. One of their newest members is a 14-year old boy known only by his nickname: Gunvolt. He, too, is an adept, with the Septimal power to control lightning, called "Azure Striker" (or "Armed Blue" in Japan).

Gunvolt, while taking cues from Inti's previous games, plays a little bit differently from your typical Run-and-Gun game. Unlike most games of the genre, Gunvolt's gun is not the main method of attack, as it fires needles that do mere Scratch Damage to enemies. Instead, by shooting enemies, Gunvolt can "Tag" them, allowing him to use his signature "Flashfield" ability to pump electricity into enemies until they're burned to a crisp. The game also features a Kudos system that awards the player with Kudos for dealing damage and performing particularly notable feats in gameplay; these Kudos are transformed into points upon hitting a checkpoint or using a Skill but are lost when Gunvolt is hit, emphasizing player skill in earning high amounts of points.