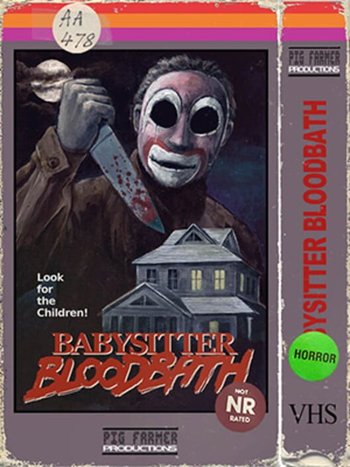 Babysitter Bloodbath is a Freeware game developed by Pig Farmer Games, who went on to develop Power Drill Massacre. The game borrows from the Slasher Movie genre (namely Halloween) and PS1 era Survival Horror games. As described by the developer:
Advertisement:

It’s a cold autumn night in Monroe, Washington and Sarah’s got no wheels and no plans, except for watching some old horror movies on TV. She gets a last minute call from the Johnsons (who saw her ad at the grocery store) to babysit their son Billy. Hoping to get $30 closer to buying a motorcycle, she gets a ride from her Mom to their house on the outskirts of town. Little does she know a simple night of babysitting will turn into an unspeakable nightmare.