Video Game / Back To Bed 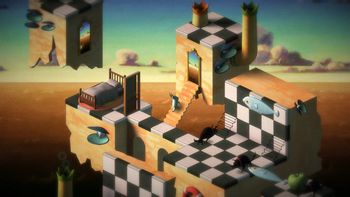 Back to Bed is a 2D Puzzle Game, developed by the Bedtime Digital Games. The game was funded

It is about Bob, a sleepwalker who often ends up far from home and in dangerous locations due to his condition. He only trudges in a straight line and turns when he hits objects, and so player assumes the role of Subob, a goat-sized creature with a human face. His task is to guide Bob back to his bed by picking up Magritte apples and dropping them in his path, so that he would turn at a right moment.

This game has been heavily inspired by surrealist painters such as Dali and M.C. Escher, and so the levels, like one in the screenshot, are frequently filled with various impossible architecture.

Back to Bed provides examples of the following tropes: