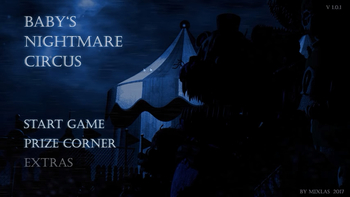 You aren't ready for what lies ahead...
Advertisement:

So you're just about done with your latest game. It's got horrible robotic abominations, a terrifying atmosphere - everything a FNaF game needs, right?

You decide to get some sleep for the night...and then you wake up, outdoors. Near...a fence? A mysterious voice echoes in the dark, stating that you're lost in your mind. In a nightmare. Something, somewhere, went horribly wrong, and the only way to get answers is to complete your own game.

Welcome to Baby's Nightmare Circus, where everything holds it against you.

Baby's Nightmare Circus is a fangame made by Mixlas. The game is, quite obviously, based off of the Five Nights at Freddy's series, mainly the fourth and fifth games, being a combo of the two; taking the fifth game's theme and characters and putting them into the environment and style of the fourth game. In the game, you play as an anonymous developer stuck in his own mind, fending off Nightmare versions of the Funtime animatronics, traversing through tent through tent to keep them at bay. The game was released on October 24th, 2017 and is available on GameJolt

. The game was updated with a new mode titled "Classic Mode" as of March 29, 2017; which is unlocked either by completing the main game or tapping the C key.