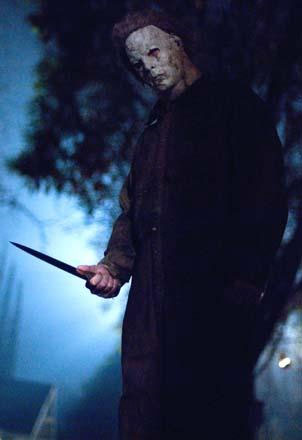 The Shape of things to come.
"I met him 15 years ago. I was told there was nothing left; no reason, no conscience, no understanding in even the most rudimentary sense of life or death, of good or evil, right or wrong. I met this... six-year-old child with this blank, pale, emotionless face, and... the blackest eyes - the Devil's eyes. I spent eight years trying to reach him, and then another seven trying to keep him locked up, because I realized that what was living behind that boy's eyes was purely and simply... evil."
— Dr. Samuel Loomis, Halloween (1978)
Advertisement:

In 1978, writer/director John Carpenter and producer Debra Hill made Halloween

, a No Budget, independent horror film. The film was a massive hit that effectively popularized the Slasher Movie genre and inspired other similar franchises such as Friday the 13th — and it also turned the film into the first of a successful major horror film franchise. Since then, the original film, and the series overall, became a celebrated, iconic pop culture staple of horror.

In all of its continuities, the series (with the exception of Season of the Witch, see below) follows various characters trying to survive the wrath of infamous, psychotic murderer Michael Myers, who lives solely to make All Hallows' Eve a night of horrific carnage and mayhem.

All of the timelines flow (except for the Zombie reboot) from the original film:

The next movie was meant to proceed from Carpenter's original vision of the Halloween series as a kind of Genre Anthology, featuring different unrelated stories of horror connected only by being related to the spooky holiday that gave the series its name. Thus, this film is the only one in which Michael Myers does not appear at all.

With the poor reception of the third film, the "Halloween Anthology" idea was scrapped completely, and all the other films returned to the saga of Michael Myers and the Strode family. From there, the films go off into a few different continuities. First, we have three direct sequels to the first two films which have been informally dubbed "The Thorn Trilogy":

Completely ignoring the events of the previous three films, the first Alternate Continuity came next:

After Resurrection nearly killed the series, the franchise laid dormant until Rob Zombie brought it back and completely rebooted the story:

Rob Zombie's second film ended up under-performing at the box office, so Zombie instead moved onto other projects, and thus the franchise once again fell into dormancy - until John Carpenter was approached by Jason Blum in 2016 for his input into a new Halloween film, targeted to be released in 2018, for the original film's fortieth anniversary. Carpenter ended up working with Blum, director David Gordon Green, and Green's writing partner Danny McBride to create:

The Halloween franchise provides examples of:

#-L
M-Z
Were you looking for a movie with a different stiff, pale-faced Michael Myers? Sorry about the confusion, it's just over here.