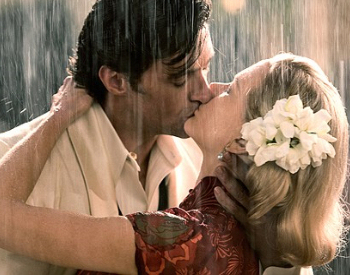 "That moment when you kiss someone, and everything arounds you becomes hazy. And the only thing in focus is you and this person. And you realize that person is the only person that you’re supposed to kiss for the rest of your life."
— Josie, Never Been Kissed
Advertisement:

In real life, kisses aren't always perfect. They can be poorly aimed, mis-timed, messy and slobbery, full of teeth, or involve accidentally choking on your partner's tongue. Innocent nibbling can end in pain and chewing gum get lost in the proceedings.

Hollywood doesn't have any of these problems.

In fiction, there is the Hollywood Kiss; the perfectly-aimed, long, sensual yet tender, closed-mouth kiss that appears in countless movies and TV shows. Usually a sign of true love, these kisses are wonderful, romantic and always look beautiful on screen.