Film / An American in Paris 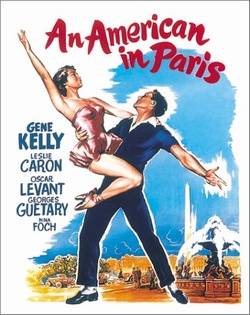 A classic 1951 musical romantic comedy starring Gene Kelly just one year before he went on to perform in Singin' in the Rain, and directed by the legendary Vincente Minnelli, with a story and screenplay by Alan Jay Lerner. Taking place in a (very idealized) post-World War II Paris, An American in Paris tells the tale of an expatriate named Jerry Mulligan (Kelly), as he attempts to scrape a living as an artist in the Left Bank. While doing so, he falls in love with Lise (Leslie Caron), but she loves his friend, Henri, one of the most successful musicians in Paris.

The plot is nothing to write home about, since it's mostly a pretext to hang George Gershwin's music and Kelly's choreography on. Luckily, the film is buoyed by an excellent cast and capable director. One quirk of the movie is its lack of Parisian locations, opting instead for hyper-stylized, colorful scenery that evokes Impressionist paintings. It is best remembered for its climax: a 16-minute, psychedelic ballet inside the main protagonist's psyche.

Adapted into a stage musical in 2015.